One thing we didn't fix

Through all of this holiday cooking, I've realized that there is one thing in our kitchen that is wrong - that we didn't fix. Although, I don't think we could have fixed it.

The oven is at the short end of the island.
In itself that is not an issue.
But for some reason, people like to stand in that spot. So if you need to open the oven, you have to ask the people to move. And for some reason, people forget that you just asked them to move, so as soon as you close the oven, they are back standing over there.
Now add to this that the oven temperature varies, so you have to keep looking at the thermometer inside... so when you are baking or cooking in my oven, you need to open it a lot! 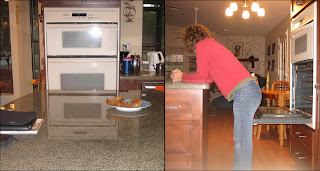 on the left is the location of the oven in relation to the island; on the right is how much space you have to stand there with the oven open. Since I am fairly small, you can see the issue.

In my sleeplessness of the other night, I was pondering this issue. Mostly, I was wondering why people stand there. If you are paying attention to where you are in space and there are things going on around your back - THAT close to your back - wouldn't you move, and stay moved?

oh.
while I was taking those photos, I realized I could capture the reflection of both skylights in the counter: 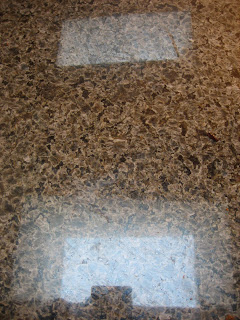